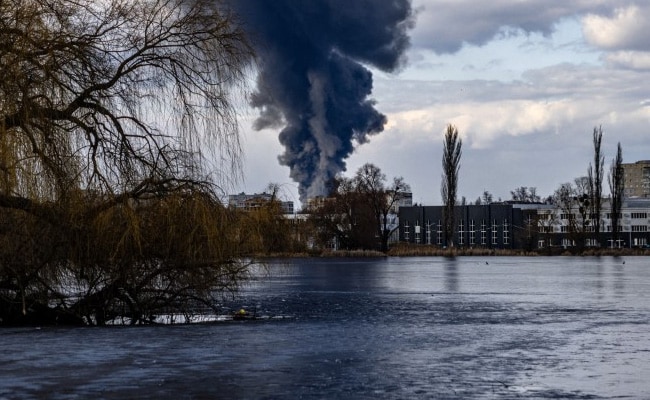 Donations are pouring in, even from a crypto-linked organisation, for Ukraine

As protests erupt around the world in support of Ukraine, crowdfunding efforts are underway to raise money for its armed forces and civilians as the country faces down Russia’s far bigger military.

According to blockchain analytics firm Elliptic, about $4 million in cryptocurrencies had been donated to non-governmental organizations and volunteer groups in Ukraine as of Friday. The donations show how an increasingly online world is providing more options for donors who previously would have been limited to giving via large charities such as the Red Cross.

The efforts are ongoing as Russian troops close in on the capital city of Kyiv, with Ukraine accusing its attacker of targeting civilians. Russia says it’s only aiming at military assets.

For all the donations, the amounts raised so far are minuscule compared to Ukraine’s military budget, which was about $3.9 billion in 2021. Lawmakers agreed to increase defense spending by about $870 million earlier this week. Russia spends more than 10 times as much as Ukraine on defence.

As explosions and air-raid sirens bombarded Ukraine’s capital overnight, more crowdfunding efforts swelled across the globe. These ranged from traditional fundraising campaigns on Facebook to crowdfunding via decentralized autonomous organizations, or DAOs — member-owned organizations that use blockchain technology to raise money via cryptocurrencies.

Pussy Riot, known for its guerilla-style protest performances and criticism of Russian President Vladimir Putin, announced the launch of UkraineDAO to raise funds for civilian organizations including Kyiv non-profit Come Back Alive and Proliska, a humanitarian organization helping civilians in the separatist regions of Donetsk and Luhansk.

“Crypto is borderless, permitless and it’s so much easier and faster than fiat,” Pussy Riot founder Nadya Tolokonnikova said in a live conversation on Twitter spaces.

Read more: Cryptocurrency Is a Potential New Tool for Billionaires to Avoid Sanctions

our goal is to raise funds to donate to Ukranian civilian organizations who help those suffering from the war that Putin started in Ukraine.

we’ll be buying an NFT of Ukrainian flag.

much support and love to Ukraine ????????????@TrippyLabs@PleasrDAOpic.twitter.com/cxVS7OiP2K

Meanwhile, Bankman-Fried, chief executive officer of crypto exchange FTX US, said on Twitter that his company gave $25 to each Ukrainian on the platform.

“One of the main promises that crypto hopes to bring to people is being able to access financial tools that might be difficult in many parts of the world to access otherwise,” FTX President Brett Harrison said in a livestreamed chat Friday, adding that the exchange’s Ukrainian user base is growing.

we just gave $25 to each Ukrainian on FTX

do what you gotta do

This followed National Bank of Ukraine’s creation of a special account on Thursday where people from around the world can send money in major currencies to Ukrainian soldiers.

Come Back Alive said it raised 20.5 million hryvnia ($691,000) as of Thursday to support the army, according to a Facebook post. The non-profit shared links to its Swift account, Patreon page and Bitcoin wallet to accept donations for its efforts. Army SOS is also accepting donationsand equipping the military with new technology such as tablets, according to posts on its Facebook page.

“You helped the military more yesterday than you did in 2021,” Come Back Alive posted on Wednesday. The non-profit has about 109 Bitcoin in its wallet, or about $4.3 million.

Nonprofits and volunteer soldiers have been central to Ukraine’s fight against Russia dating back to the annexation of Crimea. Come Back Alive, which started in 2014, has a charitable foundation that has previously helped equip Ukrainian forces with military vehicles, surveillance systems and more, according to its website. As of 2019, it had spent about $5 million on equipment.

Some financial institutions have begun implementing limits and restrictions on the fundraising efforts.

Commercial money-transfer platform Wise is currently limiting transfers to Ukraine to the equivalent of 2,500 in dollars, pounds and euros because it’s “more difficult” to operate right now, but will continue to offer its services “as long as we are able to do so,”  the company said in a press release.

The Come Back Alive Foundation was accepting donations through Patreon, a site that allows creators to receive payments, but its page was suddenly removed from the platform Thursday afternoon. According to a Facebook post from the organization, its funding page was deleted without warning.

“Patreon does not allow any campaigns involved in violence or purchasing of military equipment, regardless of their cause,” a spokesperson from Patreon told Bloomberg, adding that it violates the company’s policy. The company said in a blog post that it will refund contributors.

Representatives for National Bank of Ukraine, Come Back Alive and Army SOS didn’t immediately respond to requests for comment.