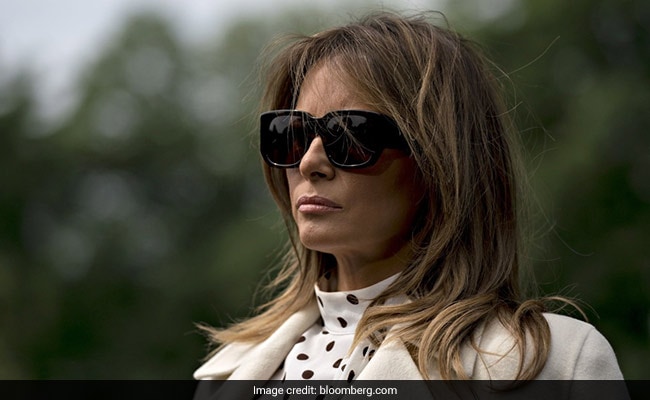 Melania Trump began an auction in January for a collection of NFTs on the Solana blockchain.

The source of funds for the winning bid in Melania Trump’s first NFT auction appears to be the creators of the project themselves.

A series of blockchain transactions show that the cryptocurrency used to purchase Trump’s nonfungible token came from a wallet that belongs to the entity that originally listed the project for sale. The former first lady began an auction in January for a collection of NFTs on the Solana blockchain, with art from her first official state visit in 2018.

Trump listed the winner of the auction on her website, along with the bid history that shows the NFT sold for 1,800 SOL (now worth about $185,000) three weeks ago. The collection, titled “Head Of State,” was one of many planned auctions Trump said she would release at “regular intervals” when she announced the launch of a her NFT venture in December.

Transactions reviewed by Bloomberg News show that on Jan. 23, the digital wallet listed as the creator of Trump’s NFT transferred 372,657 USDC, a stablecoin pegged to the U.S. dollar, to a second wallet that later sent 1,800 SOL to a third address. That third one is listed as the winner of the auction on Trump’s website.

On January 27, the original wallet sent 1,800 SOL back to the second wallet address, according to blockchain transactions. The record of transactions was earlier reported by Vice.

In a statement, the Office of Melania Trump said, “The nature of Blockchain protocol is entirely transparent. Accordingly, the public can view each transaction on the Blockchain. The transaction was facilitated on behalf of a third-party buyer.”

Every transaction on cryptocurrency blockchains is recorded on a public ledger for anyone to see, and analyzing transactions from start to finish can provide insight into the movement of money. It’s common for investors and creators in the space to own multiple wallets — and even to move assets around between them.

That freedom has given way for some actors in the space to simultaneously buy and sell the same asset and — in some cases — artificially raise its price. The process is known as wash trading. Earlier this month, a Chainalysis report showed that NFT wash traders made as much as $8.9 million in profit in 2021.

Wash trading is prohibited in conventional securities and futures. But NFTs are traded in an unregulated market and, as a new asset class, have not been designated as securities. It’s unclear if the value of the Trump NFT was inflated by the movement of money through the wallets.

Trump last year became the latest celebrity to try to cash in on the craze for NFTs, as digital collectibles increasingly moved into the mainstream. The tokens, which combine the world of cryptocurrencies and blockchain with the realm of creative pursuits, are fodder for both retail traders and professional investors.

The “Head of State” collection included a package of three artworks, including the white broad-brimmed hat that Trump wore at the state visit, signed by her. It also included a watercolor painting of the former first lady and a digital artwork NFT with motion visuals.

“Crypto Should Have Been Banned”: Berkshire Hathaway’s Charlie Munger